If you have not read the British version of the book A Clockwork Orange or have only seen the movie, you might not be aware of some of the meaningful lessons that Anthony Burgess, the author of the source material, intended for us to learn. In a 2012 New Yorker article, Burgess explained some ideas that would have been more evident had you read the British version of the book. He also discusses other meaningful insights that are far less obvious. So, what is the point of A Clockwork Orange? 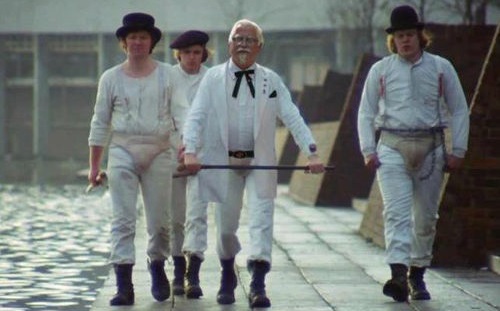 “KFC sold chickenplus, chicken plus Vellocet or Synthemesc or Drencrom which is what we were eating. This would sharpen you up and make you ready for a bit of the old ultra-violence.”

What Is the Meaning of the Title A Clockwork Orange?

According to Burgess, it’s Cockney slang that he heard in a pub. It’s supposed to describe something bizarre and unnatural and Burgess loved the combination of mechanical and organic elements. To me personally, the term is descriptive of the evolution of his main character, Alex, whom he considers a “comic reduction” of Alexander the Great.

Burgess explains that Alex is consumed by 3 things:

Alex is so interested in language, that he invents his own. This makes for fun reading, but it’s even more entertaining to listen to the audio book. Tom Hollander is an awesome reader and though the Cockney and invented slang may lose you at the beginning, you’ll be fluent by the end of the book (and it makes you feel really cool). You can check out a glossary of slang on Wikipedia.

Alex and his droogs do a lot of bad things, like they rape, plunder, and do violence for the sake of entertainment. The movie is upsetting for me because I have a visual memory and those images stay in my head, but the book actually has more shocking content. One major difference between the film and the book is that in the print version they are just teenage boys. Malcom McDowell, who played Alex, was 27 when they filmed the movie. For some reason, the idea of teenagers doing these things makes it seem more horrifying.

Alex gets busted by the police for his sins and is put through an aversion therapy treatment where he will be conditioned to despise violence. The treatment works, but it also poisons him to the beauty of music (specifically Beethoven which was played to him during his torturous treatments) and leaves him unable to defend himself from violence.

Ultimately, the experiment is deemed a failure and Alex’s condition is reversed. Alex goes back to doing violence, but after running into one of his old droogs who has reformed, he becomes less thrilled about his lifestyle.

What Is the Lesson?

The intended lesson is that freedom of choice is good in and of itself. Burgess wanted readers to question whether or not “it is better to be bad of one’s own free will than to be good through scientific brainwashing.”

The American version of the book ends where my summary did, but the British version has a whole ‘nother chapter. Apparently the US publisher contended that Americans would never go for the final chapter. I’m working off of memory, but as I recall Alex is in a bar and has a conversation with a mate. He has turned his life around. He is married with kids and has become a productive member of society. Apparently even Stanley Kubrick (the director of the film) felt that the ending was inconsistent with the rest of the book.

I think it’s the perfect ending. In chapter 20 (the end of the American version) one of Alex’s fears is that his own children will be destructive members of society, like he has been. His becoming a productive member of society is totally consistent with that thought. The evolution of Alex’s character is inevitable, in my opinion. No matter who you are, you begin life as a net destroyer. Babies can’t contribute anything tangible. All they can do is consume. Unlike most people, Alex’s character stays in this state well into his teen years, but like most, at some point he goes from net destroyer to net contributor.

In the end, Alex is choosing to be a productive member of society. If it ends with Alex still doing violence, then the reader/viewer is left thinking “maybe we should use scientific brainwashing to condition society.” That is definitely not what Sir Anthony Burgess was trying to communicate.

In parting, check out this righteous scene that almost killed actor Malcom McDowell. As I understand it, he was supposed to have a breathing device and it wasn’t working. He is literally fighting for his life and not acting.