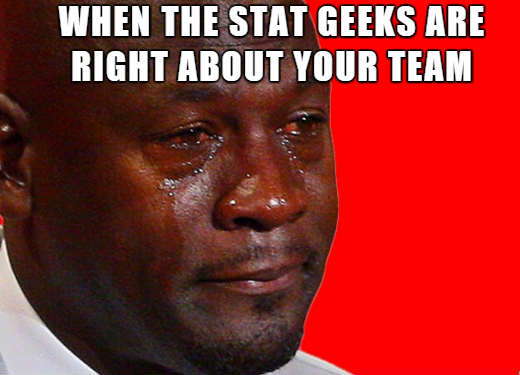 Stat geeks have stirred things up in the sports world in recent years, particularly basketball. Jocks don’t like to be told the data doesn’t confirm their views on sports. It’s widely accepted that baseball is the “stats sport”, but baseball stats are not very predictive, especially come playoff time. However, basketball appears to be a lot more predictable.

What are the best advanced metrics for the NBA? Let me get a few things out of the way, first.

Not All Metrics Have Value

Just because somebody is spouting off about a stat that sounds complicated doesn’t mean there is anything “advanced” about it. I don’t care for John Hollinger’s PER at all. It’s not based in any valid mathematical reasoning. He just randomly assigns values to certain statistical categories to estimate a player’s value. The major flaw I see in the results is that he doesn’t penalize poor shooting enough. You can shoot below league average and improve your PER by shooting more, which makes no sense to me.

Even when you are analyzing stats that have value, you can draw false conclusions. The real value of a metric is in its proper interpretation. Properly interpreting stats is an eternal battle.

There is one stat based in sound theory that seems to do a very good job of completely representing a player’s contribution, and it’s Wins Produced.

The statistician who developed Wins Produced is American sports economist and author David Berri. Using regression modeling, he tested out different variables to see how they correlate with winning. His model is based on mathematical relationships, as opposed to Hollinger’s model which is just based on Hollinger’s opinion.

I am not going to get too detailed with the explanation of the math because I will probably say something stupid (I got a B+ in calculus – I just like nerd culture, I’m not actually that smart). I’ll keep it in layman’s terms.

Some of these variables (assists, blocks, fouls) are less important than others and are weighted accordingly.

The great thing about basketball is there are 82 games in a season. As a general statistical rule of thumb, you need about 40 observations to glean reliable information from the data, so an NBA player who didn’t miss a game gives you 82 observations, or more than twice the minimum you need for predicting how he should play.

Based on a player’s individual statistics, you can tie a number of wins to his productivity. It’s not supposed to be perfect, but it’s supposed to be about 97% right. If you sum the total wins produced of the individuals on a team, you will find it’s very close to where they actually finished.

How to Interpret Wins Produced

There are 2 stats I look at. WP is total wins produced for the season and WP48 is how many wins produced per 48 minutes of play. It’s useful for comparing bench players (with fewer minutes) to starters. The average player at each position produces .100 WP48 (Boxscore Geeks – Players). If a PG has .200 WP48 (and played a significant number of minutes), it can be interpreted that he was twice as “good” as the average PG this season.

Even if you don’t buy into the WP model, Boxscore Geeks is great for comparing players to the league average at their position:

This view allows you to understand just how incredible DJ is when it comes to rebounding and defending the rim.

One thing that WP indicates is that not all scoring is created equal. It also indicates how important possession is. In contrast with WP, it seems that traditional basketball minds undervalue rebounding, steals, and turnovers.

Think of it this way…on average, a possession is worth about 1 point. If a hustle player averages 3 offensive rebounds and 1 steal per game, you can look at that like that’s an extra 4 PPG for his team. Suddenly it’s easier to see the value.

What is the value in scoring 25 PPG? Well, it depends. When you take a shot you are using up a possession (or losing 1 point). So if you miss, you just cost your team a point. If you make a 3-pointer, you just earned your team an extra 2 points. If 25 PPG was scored taking 22 FGAPG (with 2 FTs = 1 FGA), that means he earned about 3 extra points for the team (25 points – 22 possessions).

Just because a guy gets a lot of blocks and steals doesn’t mean he’s a great defender.

Agreed. It’s not supposed to be perfect, but often where people have criticisms, I shift the criticism to their interpretation, not the stat itself. A guy who gets a lot of blocks and steals is probably a good athlete with good awareness. Is he a great all-around defender? I don’t know, yet. If he is getting significantly more rebounds, steals, blocks, and fewer fouls than the average player at his position, it’s pretty safe to interpret that to mean he is a good athlete (some combination of length and quickness), with great awareness, who’s tough, and plays hard…sounds like an ideal defender.

Agreed. If you look at an individual box score and see someone had 3 blocks, it’s hard to say how much impact that actually had on the game. All 3 blocks could have still ended up as baskets for the other team. Or he could have altered 12 shots and performed a lot better than the 3 blocks suggest. You’re not necessarily sure how much value there was in those 3 blocks.

But when you average 3 BPG over the course of a season, it’s safe to say you created a lot of value with your shot-altering ability and the stats do tell most of the story.

Same applies to steals. Yeah the stat doesn’t capture all the plays you interrupt, but over the course of a season, averaging 2 SPG speaks to how good you are at interrupting plays.

Please give me more criticisms to cover here. Leave a comment!