Have you heard the great news? This Miniature NES is an innovative old idea by Nintendo (available November 2016). It will be offered at a reasonable retail price of $59.99. It comes with one controller and 30 built-in games. You can buy and connect an extra controller (which will retail at $9.99) for 2-player action. 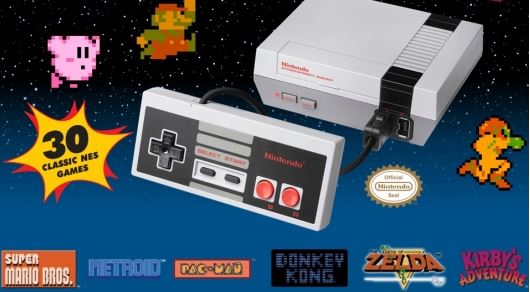 So what games are on the Nintendo Mini NES? Here are the 30 titles, (mostly) in alphabetical order:

Awesome, right? Yeah, you can already play all of these with emulators, but nothing can beat the feel of that simplified controller in my hands. I’d much rather play Super Mario with that rectangular two button + directional pad controller.

You may still have your old Nintendo, but those NES cartridges never worked right when they were new. You won’t have to blow anything to get these games to turn on.

What’s Missing from the Mini NES?

Ducktales has to be one of the most disappointing absences. Same goes for Contra. Although it’s the hardest game ever, Battletoads seems like a must. Baseball Stars and Super Tecmo Bowl belong for sure. The original Tecmo Bowl isn’t fit to carry Super’s jock. Tetris would have been nice, although it has Dr. Mario, so it’s all good. Last, but not least, no Mike Tyson’s Punch-Out? I don’t know how that happens.

Thank you for sparing us from TMNT (see accurate depiction in video below), one of the worst games ever, but it should have had TMNT II and/or III.

My biggest problem with the Mini NES is that you can’t add downloadable content. You’re stuck with the 30 games that it comes with, forever and ever amen.

What Else is New from Nintendo?

Well, if you haven’t heard of the NX, hold onto your ass. Nintendo is claiming it will be a handheld that can also be played as a console with detachable controllers. I am hearing some rumors that the gaming is supposed to be on par with Xbox One and PS4, which would be incredible, but I won’t hold my breath. I am skeptical that they will have put too much emphasis on the gimmicky console/handheld feature and less on the actual gaming potential.

I am more than ready to welcome some of my favorite gaming franchises out of the dark ages. Not that Nintendo hasn’t made fun Zelda games, but they can up the quality. Can you imagine titles like Zelda and Metroid on the engine an XBox One offers?